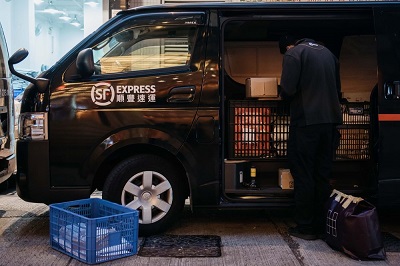 SF, the nation’s largest listed courier provider by market value, said late Tuesday that one of its units was granted China’s first ever drone operation license and that the firm was now legally able to operate logistics drones. Two phone calls to the Civil Aviation Administration of China weren’t answered Wednesday, when SF’s stock jumped more than 5 per cent, the biggest contributor to gains on the Shenzhen Composite Index.

Package delivery is key in the world’s biggest consumer market, where the rise of e-commerce and mobile payments has shifted shopping for everything from groceries to factory parts online. More than 40 billion parcels were shipped around China in 2017 -- that’s about 110 million packages a day -- and volumes are expected to reach 49 billion parcels this year, according to the State Post Bureau, China’s delivery-industry watchdog.

Delivery firms have been eyeing the use of logistics drones since about 2015 when e-commerce giant Alibaba Group Holding Ltd. partnered with Shanghai YTO Express Logistics Co. in a one-time test -- delivering packages of ginger tea by drone. Fellow online retailer JD.com, which has its own delivery service, was reported to have started making delivery drones last year and tested the service in some rural areas.

Shares of SF’s rivals declined in Chinese trading, with YTO Express Group Co. -- Shanghai YTO Express’ parent -- down as much as 2.4 percent and STO Express Co. falling as much as 1.2 percent in the mainland market.