An Electric Semi Definitely Won’t Work, But 7 in a Row Might 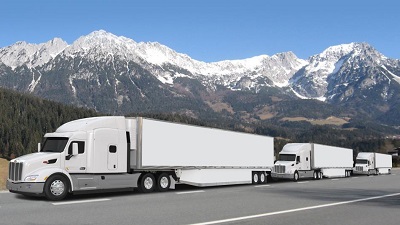 Logistics industry and battery experts have openly wondered how the company could make the plan work.

Researchers have long asserted that current lithium-ion batteries are too heavy and expensive to meet the demands of heavy-duty trucking. A report by Reuters raised an interesting possibility: correspondence between Tesla and regulators in the Nevada Department of Motor Vehicles suggested the company hoped to test multiple trucks driving in a platoon formation, relying on autonomous-driving technology.

The basic concept behind platooning is that trucks driving in close alignment significantly reduce aerodynamic drag, boosting the overall energy efficiency of the fleet. Tesla is set to unveil its electric truck, which promises to shed more light on the company’s strategy.

Platooning could make heavy-duty trucks more cost competitive, at least with enough semis. The sweet spot appears to be seven vehicles driving together on trips shorter than 300 miles, which would reduce aerodynamic drag by 50 percent. Longer hauls, on the other hand, would still face exorbitantly high costs.

So how do the economics change when you string together seven electric trucks?

By way of comparison, the total cost of an average diesel-powered truck is about $120,000, and the vehicle can run for about 1,000 miles on a single fill-up.

But the economics still don’t seem to work for long-haul electric trucking, even with extended platooning. A semi with 900 miles of range in such a scenario would require a 2,600-kilowatt-hour battery pack that would cost around $420,000.

The good news here is that short-haul trucking does represent the majority of delivery trips, according to the Bureau of Transportation Statistics, suggesting there could be an addressable market for a lengthy line of electric semis.

On the other hand, stringing together seven trucks would represent “some advanced platooning,” That number is well beyond the two or three that most platoon developers are initially aiming for, and more than any single courier usually has travelled together at the same time, he added.

That suggests the need for cross-carrier collaboration, as well as common standards and coordinated logistics. Lengthy platoons could also raise safety issues, especially if seven trucks all merge onto the highway at once or another driver tries to pass that many vehicles.

Autonomous-driving features are considered a necessary first step in extended platooning, enabling the vehicles to safely and consistently drive in close proximity over long periods.

The Carnegie Mellon study highlighted another key benefit of platooning electric semis: the lower strains on the battery packs could extend their useful life by another 60,000 to 120,000 miles, essentially adding another year of commercial use on the high end. That plus other factors, like the lower maintenance requirements of electric vehicles, could significantly decrease the lifetime costs of these trucks.