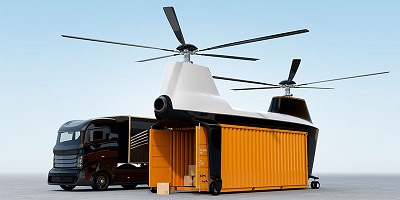 Amazon, UPS and others are exploring using drones to deliver packages to people’s doorsteps, but some companies are thinking bigger — autonomous cargo drones the size of small aeroplanes.

They are designing unmanned cargo aeroplanes to compete with short-haul trucks and small freight aircraft, and testing prototypes while pushing for their large fixed-wing drones to play a key role in the next wave of logistics.

Companies that can respond and be faster and more flexible will be the winners as the logistics landscape continues to change.

The industry’s efforts are attracting interest from major express carriers like FedEx and UPS and investors. They see the potential for cargo drones to take an early role in reshaping the freight business.

It’s pretty much open skies and cargo drone companies will be among the first flying autonomous commercial aircraft.

That’s partly because they will first fly in areas outside densely populated urban areas where safety concerns won’t be as high.

Sabrewing Aircraft Co. is another cargo drone company that hopes to unlock the economic potential of unmanned freight flights. It plans to build a sub-scale model to fly in the Pacific Drone Challenge, a transoceanic race planned by Japanese drone startup iRobotics to spur technology development and attract investors to the unmanned aerial vehicle, or UAV, industry.

These companies hope to demonstrate to industry and the public in general that UAVs are not limited to toy-sized air vehicles, but that they are capable of serving traditional industries such as air cargo with useful payload sizes, long endurance and economical operation.

A report by the Aerospace Industries Association, or AIA, and the Avascent consulting firm, predicted that short-haul cargo aircraft will be making routine flights in the U.S. for early adopters in seven to 13 years. Those flights will be at low altitudes and in rural areas.

Long-haul flights by cargo drones would follow about 15 years from now.

But there are still many obstacles to overcome before container-sized drones will by plying the skies. Communications, avionics and sensor technology have to improve. Cybersecurity issues will have to be addressed. And the regulatory landscape will have to change.

FAA regulations will be one of the biggest hurdles. The drone industry, along with some members of Congress, argue that current air transport regulations need to be relaxed for drones. A report issued Monday by the National Academies of Sciences, Engineering and Medicine at the request of Congress urged the FAA to use a different risk assessment for drones.

The FAA is working with industry and cities to figure out how to safely integrate drones into the national airspace. In May it announced 10 public-private partnerships to test drone use. But it’s not moving fast enough for many drone entrepreneurs and their backers.

Astral Aviation, a Kenyan cargo airline will begin testing cargo drones later this summer and expects to begin drone flights later this year to transport mail and packages for oil and gas companies and mining operations. Drone rules are often less strict outside the U.S.

Small commercial drones are already in use by U.S. companies. They use drones to shoot aerial photographs, survey farms and inspect building roofs, among other uses. But they have to operate under FAA rules released in 2016 that limit a drone’s weight and when and where it can fly.

Recently, Elroy Air was taking advantage of not having to comply with those rules during a test in the controlled airspace at Camp Roberts, a National Guard post in Central California. The company was in the midst of four days of test flights of their sub-scale prototype that includes a detachable cargo pod.

The San Francisco company’s fixed-wing drone takes off and lands vertically, like a helicopter, so it doesn’t need a runway. Once aloft, powered by a hybrid engine, it cruises like the small aeroplane it is.

The company also is running computer analysis on the current design of each part and system of its full-scale model. It now hopes to be flight testing the full-size model by the end of the year, which is later than earlier estimates.

Elroy Air started out as a drone taxi company but changed its focus to cargo drones as a quicker way to make money. Specifically, it wants to compete on short-haul, or 100- to 300-mile cargo hops where it expects to offer faster and more frequent freight deliveries than a cargo truck or even a small cargo plane.

It is talking to several large express freight and package carriers as potential customers but has non-disclosure agreements that prevent it from naming them.

The company envisions its drone as part of a high-load logistics system where humans work on the perimeter. Merrill said the Elroy cargo pods could be filled ahead of time in a warehouse by human workers, dozens at a time. The cargo drone would taxi by itself to the side of the tarmac and automatically load a cargo pod. It could take off, fly and land autonomously. It would then taxi to the freight area and automatically disengage the pod for humans to unload, then move to a spot to take on the next loaded pod.

It may sound like science fiction, but it’s all plausible to the freight and logistics industry.

A lot of these companies like FedEx or UPS or Amazon with a fleet of aircraft to support their operations are thinking very strategically about the long-term future of aerospace.