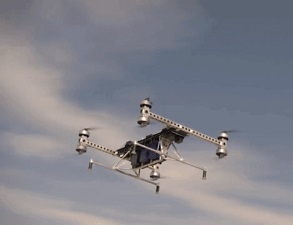 Boeing’s vision for cargo drones has little in common with the current plans of consumer-oriented companies like Amazon, DHL, or even Domino’s Pizza. Those companies are focusing on “last mile” delivery–carrying small packages to the customer at home. For instance, DHL has been experimenting with drone deliveries since 2014 and Amazon made it's first Prime delivery in 2017. Boeing’s prototype is not designed for at-home delivery at all, the company says. Instead, it seems to be for the step before delivery: shipping.

At 747 pounds, Boeing’s prototype is a monster. It’s 15 feet long and 18 feet wide, equipped with custom batteries that power eight counter-rotating engines with six-foot-long blades that let it fly at a few hundred feet of altitude at a theoretical top speed of 70 miles per hour. This flying beast can carry 500lbs of cargo.

Boeing’s prototype flies entirely on its own thanks to technology from Aurora Flight Sciences, the autonomous flight development company that Boeing bought last October. In fact, it was a small team of 50 people from Aurora and Boeing who built the prototype in just 3 months. Aurora had a head start, since it was already building a prototype for a fully autonomous drone for the US Air Force and Darpa called Lightningstrike. But that concept was completely different from Boeing’s octocopter, using a similar concept to the Bell Boeing Osprey, a plane that can take off and land vertically like a helicopter.

Until now, Boeing was putting all it's drone tokens in the military. Most of these drones were scaled-down airplanes or helicopters fitted with remote control. Now, the $94-billion Chicago company seems to be acknowledging that the future of transportation represents a larger opportunity than it previously anticipated, one that will surpass military use over time. That’s why it designed this vehicle, which uses the usual multiple rotor architecture of smaller consumer drones and Amazon’s delivery prototypes–rather than the typical

airplane architecture of military drones. The prototype is a major step for Boeing to really change air travel and transport.”

For transport, Boeing imagines that these large-scale drones would serve as flying “trucks,” quickly and inexpensively moving large cargo from distribution warehouses to, for example, shops in a town. They can also serve to move equipment to remote industrial facilities, like oil rigs, all without pilots. When it comes to passenger travel, we’ve already seen what companies like Uber, Helicopter or Airbus want to do with their electric autonomous air vehicles. Whether or not it develops its prototype in that direction, Boeing’s octocopter is a testing platform that seeks to lay the groundwork for new modes of transit.

It may not be like the Back to the Future-style highways-in-the-sky scenario, but it’s no longer crazy to imagine a sky filled with these machines taking people from city centres to airports or goods from warehouses to shopping areas.