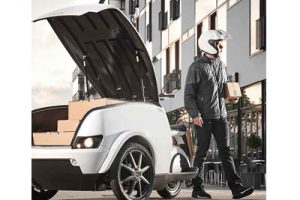 A cycling entrepreneur who trusted his prototype so much he rode it through Kazakhstan is working to convince London businesses that cargo-bikes are the future.

Lawrence Brand, founder of start-up Porterlight, has designed a London-specific cargo-bike made for carrying anything from sandwiches to parcels, and even children.

Mr Brand was inspired after studying abroad and seeing how many people use cargo-bikes as a day-to-day form of travel.

He said: “I was living in Sweden studying for my Masters and they have a huge cycling culture and all use cargo-bikes to travel around with goods or children.

“So I decided to make something similar, but for London. I designed it to be able to move away faster at traffic lights and it is generally more nimble to suit busy city roads.

"It also fits in an apartment lift for those who live in flats.”

Mr Brand used his evenings to make a prototype whilst working full-time which he then tested out by cycling 5000km through Kazakhstan.

“It was perfect” he said. “I didn’t even get a puncture! After that there were a few revisions to create the final model.”

He then applied for funding from the New Enterprise Allowance (NEA) scheme – designed to boost self-employment and innovation.

The scheme gives job-seekers with bright ideas funding and support from their own dedicated mentor to help them get their business off the ground.

He said: “Porterlight is a shining example of what can be achieved with the NEA in your corner, and I want to see ever greater numbers of people taking advantage of what this scheme has to offer.”

“The NEA is playing its part by giving tens of thousands of people the confidence and support that they need to be their own boss.”

The company was formally set up a year ago, and in that time it has grown, taking on more staff and serving customers all over the world.

It had recently designed a bespoke “pop-up stall” bike for Deliveroo, one of its global customers.

Mr Brand said: “At the moment we are focussing on working with businesses but we would eventually like to sell to individuals.

“I think it is exactly what London needs. Companies have their vans and cars stuck in traffic jams and they see bikes whizz past them.

“Cycling is a great way to get around and we would like to encourage more people to get into it.”