Mercedes Vans Filled With Delivery Bots Heading To Your Town 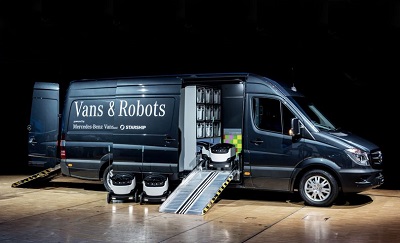 Delivery vans containing individual ground-based drones may be the future of home deliveries – and they're set to hit the streets in their first tests.

Mercedes-Benz has created a prototype van with Starship Technologies that allows eight of the company's small delivery vehicles to be stored inside a Sprinter van.

It is said that when a van stuffed with the robots and deliveries for households and offices arrives at a central location, it will then be able to unload the delivery vehicles, which will complete the last leg of the journey to avoid city centre traffic.

"It is needed because the robots are limited in their radius in the last two to three miles as people don't want to wait for on-demand deliveries," Allan Martinson, the chief operating officer of Starship Technologies told WIRED. He added that the Starship robots will be able to travel two to three miles from the delivery van, and the company claims this will help deliver 400 packages across a nine-hour shift.

"In order to get goods and e-commerce packages to an area, you still need to use vans and that's the best delivery method for the first 10 miles from the delivery centre. By merging vans and robots so we get the best of both worlds we can get a very efficient delivery."

While a number of companies, including Google and Amazon, are looking to use airborne drones for deliveries, Starship believes its drones –which are effectively autonomous boxes on wheels – provide a better solution. To date, the firm, which launched in 2015, has signed deals with Just Eat, Hermes, Metro Group and Pronto.co.uk to bring its deliveries to the UK.

At present, one van has been built and initial testing has taken place, Starship said. Starship Technologies added that more testing will be taking place now the van has been announced, but it hasn't been able to put a date on when the technology will be ready to be used commercially.

Mercedes said its Sprinter van incorporates a "conveyor racking system" that can be loaded with a total of 54 load carriers for the Starship bots. The van has been fitted with ramps that allow the bots to trundle in and out of the vehicle.

"These load carriers have been designed and optimised by Mercedes-Benz for ground-based robotic delivery applications and can be loaded directly into the Starship delivery robots," the vehicle manufacturer continued in a statement.

Deliveries would be co-ordinated by an algorithm that determines the best route for the van to take. This algorithm would pick out the best location for the van to stop and release the army of delivery bots and also collect those that have completed their routes.

"At designated delivery stops, the van's driver takes the load carriers for the impending deliveries from the racks according to the pick-to-light process and inserts them into the robots," Mercedes explained.

"Instead of driving door-to-door and doing stop-and-go deliveries with the vans, it can stop in a location, which could be a carpark, and wait for the robots to come and load-up the goods and do the last mile of the delivery," Martinson said.

The two companies continued that the bots will be equipped with cameras that allow a central control unit to be able to monitor their progress and, if anything goes wrong, a human can be alerted to the problem.

As well as the partnership, unveiled at an event in Germany, the vehicle manufacturer outlined its plans for the future. In particular, the firm said it sees the future of deliveries to customers doors being "an integrated system, the vehicle merges a number of innovative technologies for last-mile delivery operations".

Powered by a joystick the van is shown to have a 75 kW electric drive system and a range of 270km. Called the Vision Van it is shown, in the gallery below, to involve an automated cargo space and is able to launch drones from its roof.