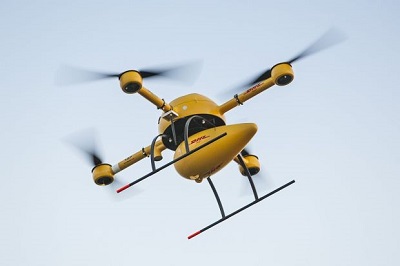 Whether bikes or drones, delivery firms are looking for ways to get packages to customers quicker as electronic commerce is revolutionising the retail market.

Its subsidiary SEUR in Madrid is developing mini-facilities where packages are brought before being distributed to customers nearby – an alternative to the current system where delivery vans are loaded at bigger centres, often located outside the city.

Parcel delivery was the first to be liberalised in Europe, but it is the former monopoly postal services of France and Germany that have come out on top.

US giant FedEx, trying out robots as well as drones, has bought TNT from the Dutch postal service.

While email has eroded the volume of letters, e-commerce has led to a boom in parcel delivery.

“The market remains marked primarily by the growth of business to consumer, which accounts for 95% of the increase,” said Geopost’s director Paul-Marie Chavanne.

Geopost saw its sales rise 8.6% last year to €6.2bil (RM30bil), with more than three-quarters coming from outside France. It now accounts for more than a quarter of the La Poste’s total revenue.

The challenges delivery firms face vary by the area, urban or rural, as do the solutions they are looking at.

“The trend, in all European countries, is to deploy these mini-depots to adapt to the constraints posed by the greater traffic” in cities, said Yves Delmas, the deputy CEO of Geopost for Europe.

In Paris, the company sees the need for around 80 mini-depots, which in some cases could be installed in parking garages or even in post offices.

A small client service area abuts the storage room lined with shelves and a small loading area used by deliverers, in particular cyclists from Stuart, a startup delivery service for retailers that La Poste recently bought.

New ventures like Stuart are trying to offer bricks-and-mortar shops a service similar to what firms like Deliveroo do for restaurants in France.

In rural areas, the challenge is the distance between clients, and Geopost is now looking towards drones.

“Drones have a future in isolated areas,” said Chavanne, noting that the firm has to drive 80 kilometres (50 miles) to deliver packages to some customers in parts of the Alps.

“The costs are enormous, so in the future we’ll do that with drones and it will be much faster, more efficient and cost less,” he said.

La Poste has been testing a drone in France’s southern Var region, making a 15 kilometre daily run between stations.

But Chavanne does not think it likely that we will see thousands of drones above Paris or New York delivering individual packages anytime soon. The idea promoted by some of drones delivering parcels through open windows to a client’s kitchen table is a “child’s dream”, he said.

“That’s no more than a dream due to security concerns obviously.”

There could be a role for cargo drones, however, to transport parcels from hubs outside cities to mini-depots in the centre, where they would be distributed to customers by means such as bicycles, said Chavanne.

While cargo drones haven’t yet been developed, Chavanne sees them becoming available within two to three years.

Geopost’s German rival DHL has also tested drone delivery to a relatively isolated Alpine community, but its “Parcelcopter” also did not ferry packages directly to clients.

Instead, it delivered them to a “skyport”, a station that automatically transferred them to lockers below where they could be collected by customers.

FedEx is also looking at only a limited role for drones in its operations for the moment.

Its CEO Frederick Smith told a recent meeting of the association of companies that help the US military with transport that FedEx is “considering drone use in monitoring the perimeters of our facilities and in checking equipment in our yards and on our tarmacs”. They would also survey damage done to its facilities after natural disasters.

Smith put a greater focus on technology inside its sorting facilities, in particular the use of robots, which he said are beginning to permeate FedEx’s operations.

“We’re introducing mobile robots in our supply chain warehouses to move customer products to assigned locations, saving time and cost,” Smith said according to a transcript of his remarks posted on FedEx’s website.

He said FedEx was also testing robots that can unload shipments from trucks as well as move oversize goods around facilities. — AFP