Drones vs. Robots: The Battle For Our Delivery Future Is On 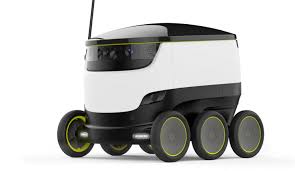 Since Amazon first talked about its plan to one day deliver packages by drone, the world has been captivated with that vision of the future. But a new company started by two of Skype’s co-founders thinks the real future of small cargo delivery is in autonomous robots.

Founded by Skype cofounders Ahti Heinla and Janus Friis, Starship Technologies is today unveiling its vision of a delivery robot, a small, six-wheeled device capable of carrying as much as 20 pounds up to a mile or more from a central service hub.

Starship’s value proposition is that its robots can make its deliveries–it is aiming first at the grocery market, but also imagines working with standard packages–at between five and 15 times cheaper than human delivery services. Where the average delivery fee might be between $5 and $15, Starship thinks it can cut that cost to $1 per trip.

“Every year,” says Starship chief commercial officer Keith Cornell, “Americans and Europeans receive about 20 billion deliveries, and they combine to make about 130 billion trips to pick up things like groceries or other small items.”

“Our concept,” Cornell tells Fast Company, “is to change the dynamics of that last mile through the use of robots.”

Starship’s system is simple: Users would place an order for, say, groceries, and with the company’s mobile app–or that of one of its customers–then choose a delivery time when they know they’ll be home. Starship says the Internet-connected robot can handle up to two bags of groceries and as much as 95% of packages.

At the designated hour, a Starship robot would head out from a centralized hub, navigate the streets on the way to the customer’s home, and then complete the delivery.

While Starship is hoping its robots will soon be making grocery and package drop-offs all around the world, the company is not aiming at dense urban environments. Rather, it’s shooting for areas with around 1,000 households per square mile, far less than a city centre. That’s because its robots can’t handle the traffic and pedestrian complexities of such environments.

But less dense cities and the suburbs are right in its wheelhouse. Thanks to a series of cameras and sensors placed all around the small device, it is meant to be able to navigate safely down sidewalks and across streets on its way to customers’ homes.

Starship’s business plan revolves around large outlets–grocery chains, delivery companies, and others–contracting to use its robots. Those outlets would ideally operate their own service hubs, out of which the robots would operate. In many cases, the company says, those customers would incorporate the end-user tools for ordering a Starship delivery into their mobile apps.

The company, based in London (with offices in Estonia and the United States), is planning on launching two five-robot pilot projects next year, although it won’t name its inaugural partners. It also hopes to initiate full-scale commercial operations in 2017.

READY TO TAKE OVER

According to Heinla, Starship’s robots are capable of recognizing and avoiding most obstacles, including people or pets, as well as obeying traffic lights and rules.

For the most part, workers based at a hub would first map an entire service area, allowing the robots to operate on roads known to be safe.

“It is not actually making those decisions on its own,” Heinla said. “It will only cross [streets] in places where human mappers have designated it’s a safe crossing place.”

In some cases, however, the robots may encounter situations they don’t know how to handle. When that happens, a human operator at the local hub–who is able to see all around the robot thanks to is many onboard cameras–can take over by directing the device around the obstacle.

Starship knows that many people worry what would happen if the robot is stolen. In that situation, the company says, a human operator could speak to the thief via built-in speakers, telling them that, thanks to GPS onboard the robot, police are on the way.

The goal, Heinla says, is for the robots to operate autonomously 99% of the time. Ideally, he said, just 1% of trips would involve human intervention. During the early pilots, the robots would likely be controlled by humans about half the time, although Cornell says the company hopes to boost that number to 90% by the end of 2017.

The company is also aware that different cities, states, and countries have widely differing laws governing things like autonomous robots. But chief operating officer Allan Martinson says that Starship believes it has “considerable operational freedom in many, many parts of the world.”

In some cases, according to Martinson, Starship has already received written permission from municipalities to operate its robots. Others places have no existing vehicle codes that regulate the devices. But Martinson admitted that in some places, it will be necessary to work with regulators to devise rules allowing the robots.

Of course, the robots would have to cross streets, which would almost certainly require them to be regulated in some manner.

Starship currently has about 30 employees, and has until now been bootstrapped by its founders. However, the company plans on raising venture capital soon.

There’s no doubt that delivery drones are sexy, and there will certainly be companies pursuing that market in the near future. The question is whether such a system is economical and safe enough to reach mass scale.

That’s where Starship is hoping its combination of sophisticated software and a broad service-based ecosystem is better able to handle large numbers of deliveries. In the end, the company argues, we don’t need no stinking delivery drones; robots are on the job