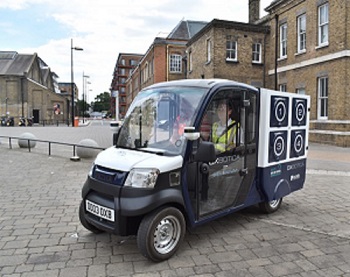 Fire up an app, order some groceries, and get them delivered to your door. So far, so normal, thanks to the likes of Amazon Fresh and Instacart. But in one part of London, that kind of delivery is currently being made by a self-driving van.

The deliveries are made possible by a vehicle called CargoPod, which was developed by Oxbotica, an autonomous-vehicle spinoff of the University of Oxford, and makes use of the online grocery retailer Ocado’s infrastructure. It’s a small electric vehicle decked out with lidar sensors and stereo cameras, which uses Oxbotica’s autonomy software to sense obstacles and navigate roads without human intervention. (Though, as in America, British law still requires a human safety driver behind the wheel.)

On the back of the vehicle are eight pods, each with a crate that can hold three bags of groceries. The van is filled by human hands from a small distribution center—in this case, a larger Ocado van, which stores 80 of those crates—and sets off following a route to its drop-offs, which is broadly planned in the cloud but ultimately executed by the vehicle. When it arrives at an address, the customer is alerted via smartphone and must press a button on the vehicle to open a pod door and grab the groceries.

Like other automated delivery trials in the past, such as those carried out by Amazon’s drones, the operation has a whiff of gimmick. Orders are limited to three food packs containing nonperishable goods like dried fruits or chocolate cookies, the trial will last only 10 days, and the delivery is limited to the bounds of Berkeley Homes, a gated residential development in Woolwich with limited traffic. There are still obvious tweaks to be made, too—not least the need for some form of identification when it comes to unlocking the pod door.

But this is designed to be more a proof of concept than a real commercial offering right now. And as I stood watching the car smoothly navigate the quiet residential London streets, it looked like one of the more compelling autonomous-delivery trials we’ve yet seen—far better, for instance, than the Starship Technolgies pizza-delivering robots that trundle on sidewalks at four miles per hour, and capable of hauling far greater loads than any aerial drone.

That’s not to say there haven’t been problems. In order to gain access to one property, admitted Oxbotica chief executive Graeme Smith, “we need a human to be present to press a button to open the gates.” And, he continued, “the first time we encountered a garbage truck blocking the route, the vehicle had to sit patiently and wait. But one of the objectives of being here is that we collect data on those types of unusual events to figure out what we could have done better.”

Even so, Ocado, whose highly automated distribution centers can be seen in the video above, sees the technology as becoming a very real complement to its existing distribution efforts. “We’ll see more trials happening in the next few years,” explains Paul Clarke, Ocado’s chief technology officer. “The next evolution could be something bigger, and perhaps refrigerated.”

When they no longer need a safety driver, Clarke imagines vehicles like these being used to provide on-demand delivery of groceries from a small nearby distribution hub, so that instead of booking a delivery slot customers hail their groceries—when they arrive home from work, say, even if it’s late at night. Or it could function as a kind of vending-machine-on-wheels for late-night snacks, not dissimilar to the service being trialed by the startup Wheelys in China.

Interestingly, the ownership model of these small vehicles seems very much up for grabs: they could do double duty ferrying humans as well as goods. “In the future these vehicles are not necessarily going to be used for one purpose,” says Clarke. “One person may have booked an autonomous trip from A to B, and actually there may be something just around the corner to backhaul on the return to trip. That’s going to help drive the cost down, and reduce the number of these vehicles that we actually need on the roads.”

Larger deliveries will probably still be performed using a van with a human behind the wheel, if only to help customers unload the goods. But Oxbotica reckons it may be able to trim fat from that system, too. “If you’re a big delivery company, the prospect of being able to increase your efficiency by 5 percent is a really big deal,” says Smith. “If you find autonomy can free up your driver for an extra 5 or 10 minutes per hour because they can do paperwork while the vehicle's moving, there’s your cost saving.”