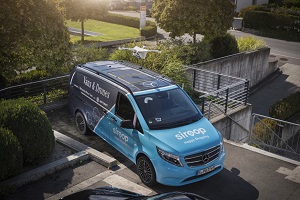 At a prearranged location somewhere in the streets of Zurich a van waits, engine running in preparation for a quick getaway. Suddenly a drone appears in the blue sky. It circles the van once, twice, and then begins a precision descent onto a specially prepared mobile landing station on the roof of the van.

The driver quickly retrieves a package from the drone and, as the drone climbs rapidly back into the air to return to its point of origin the van heads off through the city streets to deliver the package.

No, it’s not a scene from a James Bond film but the result of a collaboration between Mercedes-Benz vans, American drone systems developer, Matternet, and Swiss online marketplace, Siroop. The three companies are trialling a new delivery system in Zurich that will use drones to try and speed up delivery times for online customers.

The premise is that customers can make an online purchase via Siroop, the manufacturer will then despatch the item – presuming it weighs less than 2kg – on a drone that will then deliver it to a pre-defined location where one of two Mercedes-Benz Vito vans equipped with precision landing technology await. Once the package reaches the van it is then delivered to the customer address in the traditional manner of courier services around the world.

The Vans & Drones project was presented by Mercedes-Benz Vans and Matternet at the ‘Van Innovation Campus’ event in September 2016. The pilot project in Zurich, with Siroop as the first system user, is the next step in the advancement of the concept.

The shipment is not delivered to the consumer by drone, but rather to the delivery van, which handles delivery for the final segment of the last mile. The use of a van like the Mercedes-Benz Vito as mobile landing stations for the drones is ideal because it not only reduces delivery times but also ensure that the drones remain around two metres above the ground reducing the risk to passers-by. In theory it should be a highly efficient delivery system.

On-demand delivery is still only a concept at the moment though. Using drones in a logistics chain is not a new idea but it is slowly beginning to come to fruition through trials such as this one in Zurich. Obviously it’s a high tech response to a particular circumstance but for anyone running a courier firm, particularly those based in larger cities, this could be the kind of thing you may need to bear in mind when choosing which vans to operate in future.

Using drones cuts the amount of time a van spends on the road, thus reducing both financial and environmental costs to the business. Coupling that with an efficient van like the Mercedes-Benz Vito could be the way to go in the not too distant future.

Now all you need is a watch that turns into a sportscar and a sunset to drive it into.