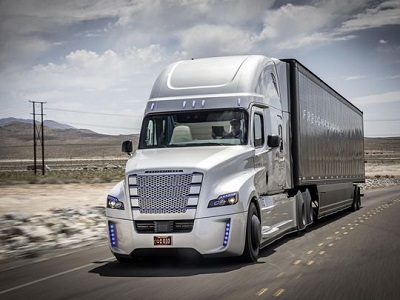 Advocates for the trucking industry are pushing back on proposed legislation that largely removes restrictions from operation of autonomous passenger cars but does not do the same for commercial trucks. They say innovation will be stifled at a time of rapid advances.

The push comes as companies like Tesla Inc. have discussed plans to platoon partially automated electric trucks with a lead truck. In that scenario, a human driver in the lead truck punches a hole in the wind, with other trucks drafting close behind for maximum efficiency and to take up less space on the highway. The trucks communicate electronically and can brake immediately as needed.

Testing of autonomous trucks has been ongoing over the past two years: Daimler Trucks North America’s Freightliner Inspiration semi became the first licensed autonomous commercial vehicle to operate on open public highways in the United States when it was cleared for testing by Nevada in 2015. Uber, which acquired self-driving truck maker Otto in 2016, tested a 120-mile shipment of Budweiser in a truck that had no driver in the front seat in Colorado.

Even the federal government has gotten in on the act: The Federal Highway Administration demonstrated a three-truck platoon of partially automated trucks on a Virginia interstate in September.

“These new technologies have the ability to increase capacity on our highways and make freight transportation more efficient,” Acting Federal Highway Administrator Brandye Hendrickson said after the test.

The law on autonomous vehicles is one of the few pieces of legislation moving quickly in a bitterly divided Washington. Self-driving trucks were dropped from the legislation Sept. 28 after labour unions raised concerns about millions of professional drivers losing their jobs.

“These are vehicles that share the road together, so they should share the same regulatory framework,” said Sean McNally, vice president for communications for the American Trucking Associations, which lobbies for major truck companies. “If companies need to operate under different regulatory policies in, say, Michigan than California, that would have a significant impact on testing.”

The self-driving bill — minus trucks — has been approved by the U.S. House and cleared a key U.S. Senate committee. The measures, which would allow automakers to each put 100,000 or more self-driving cars per year on U.S. roads — and prohibit states from blocking them — has been touted as a rare bipartisan bill in this Congress.

In a bid to exclude trucks and passenger buses, the Senate version of the bill places a 10,000-pound weight limit on its definition of a “highly automated vehicle.” Most big-rig semis weigh around 80,000 pounds. The House version includes language stating that the definition of a self-driving car “does not include a commercial motor vehicle.”

A spokesperson for U.S. Sen. Gary Peters, who pushed for trucks to be removed from the Senate’s bill, said in statement that the Bloomfield Township Democrat believes “self-driving trucks raise a separate set of issues, especially given their economic and employment impacts, that must be more thoroughly examined ... before moving forward with legislative action.”

The American Trucking Associations’ McNally noted that states could ban self-driving truck testing on their roads unless the bill’s definition of an autonomous vehicle is broadened.

“If the bill doesn’t specifically address the trucking issue, you may get into a murky area where states can do whatever they want,” McNally said. “We need an explicit preemption for commercial vehicles. The only way to get that certainty is if autonomous trucks are in the bill.”

Norita Taylor, a spokeswoman for the Owner-Operator Independent Drivers Association, which represents truck drivers who are not affiliated with large trucking companies, said the self-driving truck debate should not just be focused on big trucking corporations represented by the ATA.

Taylor added that her organization is OK with the decision to handle self-driving trucks separately from the rapidly moving legislation that pertains to driverless cars.

“Trucks need to be considered separately,” Taylor said in an email. “There are safety and security issues, an entire industry of jobs, regulations and need for cost versus benefit analysis.”

Safety groups have raised concerns about the idea of automating 80,000-pound big rigs and allowing them on U.S. highways. They point to the high number of crashes that occur now between human-operated cars and trucks.

“You’re talking about a great big huge truck, and it takes them much longer to stop,” said John Simpson, privacy project director at the Santa Monica, California-based Consumer Watchdog group.

“The potential devastation that a large commercial vehicle can wreak is just horrendous,” Simpson continued. “That’s one of the biggest problems on some of these interstate highways, the interactions between the trucks that are on the road and the cars.”

IHS Automotive estimated in 2016 that 60,000 self-driving trucks could be sold annually in the U.S. by 2035, but that is assuming that Congress clears the way for them to operate on the nation’s roadways.

Labor unions who pressed Congress to block self-driving trucks in a bid to protect jobs of truck and bus drivers are urging lawmakers to keeping pumping the brakes. They cite a May report from Goldman Sachs that forecasts the professional driving sector stands to lose 6.2 million jobs globally by 2030 due to the advent of fully autonomous vehicles.

Samuel Loesche, legislative representative at International Brotherhood of Teamsters, which counts 600,000 professional drivers among its membership, said his union is remaining vigilant about the possibility of self-driving truck supporters moving to put the truck provisions back into the autonomous driving bill when it comes to the Senate floor.

“If it’s reinserted into the bill on the floor, it would completely blow up the bipartisan agreement,” he warned.

Loesche added: “We’re not anti-technology, we’re not anti-innovation. What we are is pro-American and pro-worker. Anything that’s done in this space needs to take into account the job and economic issues that manufacturers and tech companies don’t seem to want to deal with.”

Larry Willis, president of the AFL-CIO’s Transportation Trades Department, agreed, saying his union’s members “don’t believe this is the right time to introduce autonomous vehicles on the truck or bus side.”

“We’re not ready for that transition,” he said. “There has to be a lot more thought given to making sure that we’re doing enough on the worker side and the job protection side for the huge transition that is going to come with these advanced technologies.”

ATA spokesman McNally countered that self-driving trucks will not be able to live up to their full potential unless Congress gives the OK for them to operate nationwide.

“Autonomous trucks as developed are not going to be confined to one state,” he said. “Our belief is you derive the benefits from this with long hauls. We are an interstate industry, which means we need laws that recognize that.”