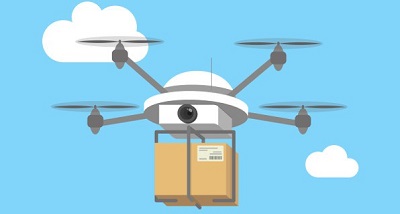 Drone deliveries sound like a brilliant way to get parcels delivered to your home. It could reduce the number of cars on the roads, helping to reduce pollution, and enable faster delivery times.

Yet, there are a few things in the way before this technology becomes a reality.

For one, there are no-fly rules in central London, which prevent drones from coming within 150 meters of densely packed buildings.

As well, there are concerns over the security of a package once it lands on someone’s doorstep via a drone.

The payments company Worldpay is looking to correct the last issue.

It is currently working on a Drone Pay proof of concept that could verify the intended recipient of the package and pay for the delivery.

Here’s how it could work.

Worldpay’s Drone Pay proof of concept is just a prototype at the moment. It centres around a drone landing pad which has payment card technology embedded into the pad.

This looks like a doormat and can be used at your front door or maybe in your garden.

The idea is that a flying drone, carrying a parcel, could land on the drop pad and read the card details stored within the doormat. If the information confirms that this is the right recipient, the drone would release the package.

Why is this a good idea?

For one, it would help solve one of the major issues of online shopping which is when parcels seem to disappear on route. According to Citizens Advice, around 21 per cent of customers said their parcels failed to materialise.

As well, there is also the potential that the drone could take a payment when the parcel is delivered. That means you don’t have to pay for the parcel until it actually arrives on your doorstep, giving you peace of mind that no money is changing hands until you’re safe with the knowledge the product has arrived.

Worldpay says that the details stored in the mat are encrypted, so there is no other way for others to take a payment.

What are the cons?

Worldpay says it is tackling the problems of when deliveries going awry but there is nothing in the Drone Pay concept yet that can do anything about parcels being stolen after they were delivered.

When questioned, the company says the advantage of the helipad mat is that a parcel could be delivered securely to a back garden or a balcony, instead of your front door. If you’re worried about a parcel being stolen, Worldpay says you can give permission for a delivery to be left with a friend or neighbour.

Starship Technologies, the company behind the autonomous drones which delivery takeaway food and more, have an interesting way around this. When you order a meal, like through JustEat, and a Starship robot delivers it, you receive a unique link which you need to access the robot’s cargo.

However, this necessitates someone being in the home to receive the delivery, whereas Worldpay is looking to take this out of the equation.

As well, this delivery idea wouldn’t really work if you lived in a flat in a high-rise building but Worldpay can’t do anything about that.

How long until Drone Pay becomes a reality?

As this is still very much a concept, details such as pay and timelines are still up in the air.

Worldpay say "Details around the type of platform the landing pad is best suited for the technology to be embedded is yet to be decided. If there is enough interest in the concept, the cost of a landing pad would be evaluated.”

The technology is still pretty far off before drone deliveries become a reality. Still, Drone Pay is an interesting look at the logistics around drone deliveries and sorting out parcel delivery pain points for customers.