What Is AdBlue & How Does It Work? 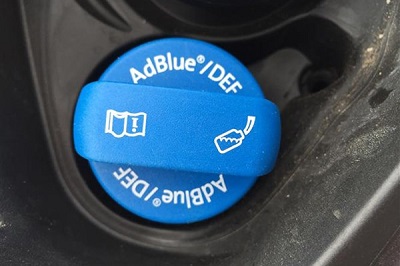 Vehicle manufacturers are going to great lengths to reduce their cars’ impact on the environment. AdBlue is the answer to a particular area of concern - nitrogen oxide emissions.

Euro 6 emissions regulations have clamped down on harmful gases being emitted by vehicles across Europe, with nitrogen oxide emissions from diesel cars hitting the headlines in particular.

AdBlue is now being used in a growing number of diesel cars to reduce the amount of these gases coming out of the exhaust pipe.

AdBlue is a solution made up of urea and water injected into the car’s exhaust system before harmful nitrogen oxide comes out of the exhaust pipe.

How does AdBlue work?

The AdBlue is fed into the exhaust and reacts with the nitrogen oxide gas produced by the combustion process, breaking it down into harmless nitrogen and oxygen.

At high temperatures the AdBlue turns into ammonia, breaking down nitrogen oxide in the process, which means the volume of particles being emitted is significantly reduced.

This is called Selective Catalytic Reduction (SCR) – a system that injects a solution such as AdBlue through a catalyst in the exhaust.

Does your car come with AdBlue?

If you’re driving a newer diesel car, chances are it comes with AdBlue technology. It won’t be obviously advertised, but manufacturers like Volkswagen, Audi, Mercedes, Peugeot, Citroen and Jaguar all feature AdBlue technology.

Most give a clue in the name – Peugeot and Citroen’s BlueHDi engines feature it, while Volkswagen includes the initials SCR in the name of some of its diesel cars.

Failing all else, look in the car’s handbook to see if it comes with AdBlue.

When do you need to top up AdBlue?

If you’re not explicitly told by your dealer that your car comes with AdBlue and that it’ll need topping up, your first sign will be when it’s running low and you get a warning flash up on your dashboard.

Only very small amounts of AdBlue are used at a time, so you won’t need to top up like you do with fuel, but it’s important that you don’t let supplies run out.

For some context, a Volkswagen Passat uses around 1.5 litres of AdBlue every 620 miles, and the tank size is 13 litres, so a full tank of AdBlue is good for about 8,000 miles of driving.

Peugeot, on the other hand, says the AdBlue only needs topping up every 12,500 miles and that this will be carried out as part of a scheduled servicing plan for most drivers.

However, different driving styles, journey types and driving conditions will have an impact on how much AdBlue is used.

What happens if your vehicle runs out of AdBlue?

Put simply, your car won’t start. It would be quite careless to run out of AdBlue, because most cars will warn you very far in advance – usually about 1,500 miles before it’s empty.

You won’t be able to just stick a tiny amount back in the tank for it to work, either. A minimum amount will need to be replenished for the car to start again. So we’d suggest you top it up as soon as the warning appears – it’ll save you hassle further down the line.

Where can you top up on AdBlue?

You’ll be able to get top-up bottles of AdBlue through your dealer or somewhere like Halfords, so you won’t have to take your car to a main dealer for someone to do it for you – it’s like topping up with screenwash.

The location of the filler cap varies between cars. In some it’s located next to the fuel filler cap (like on the Audi A4 above), while others are at the side of the boot or under the boot floor. Again, find this out before you get close to running out so there aren’t any surprises when you come to top up.

What else do you need to know about AdBlue?

Some sources claim AdBlue is corrosive and should be handled with care, while others claim it’s harmless and that all you need to do if you get it on your hands is wash them thoroughly or give the car’s bodywork a wipe if you spill a little.

Because of these contradictions, we’d suggest you take as much care using AdBlue as you would any other fuel or liquid. You wouldn’t want to get diesel all over your car, nor would you spill oil all over the engine bay, so the same goes for refilling with AdBlue – take special care if you’re refilling a reservoir located in the boot, and make sure you don’t fill up the wrong tank if it’s a car with the filler cap next to the diesel one…

Storage is probably the most important consideration. AdBlue needs to be stored between -11 and 30 degrees C and has a shelf life of around 12 months in these conditions. Above 30 degrees C it starts to decompose, and freezes below -11, but retains its qualities when it thaws again.