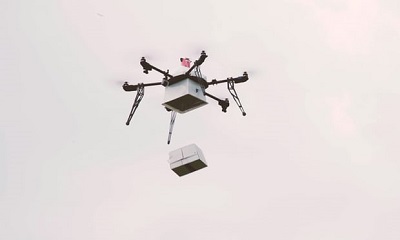 A drone successfully delivered medical supplies to the New Jersey coastline straight from the deck of a ship, marking the first ship-to-shore delivery in the US.

Delivery of medical supplies to inaccessible locations during relief efforts could see ships deploy armies of drones ferrying supplies to and from shore.

The flight was designed to test whether drones could be used to carry human medical supplies to and from areas that cannot be accessed during major storms, earthquakes or other disasters.

While drones have already been mooted as one way to deliver goods, such as Amazon’s Air Prime drones, biological samples are not like a shoe or a book, they are pretty fragile items.

For example, if blood is being carried on the back of motorcycle, shaking caused by the bike and its vibrations can ruin the sample.

About 100 people looked on as the drones flew between an onshore medical relief camp and a test facility on a vessel. They took medical supplies from the vessel to the medical camp, while blood and other medical specimens were flown between the sites.

In the event of a natural disaster like Hurricane drones rapidly delivering emergency medical supplies, food and water, the future could soon be a reality.

Eight of the world’s 10 largest cities are coastal communities, and more than three billion people or 44% of the world’s population live within 95 miles of the coast.

It will probably take about five years before drones are used regularly in disaster situations. Roughly 59 nations currently have drone regulations, so responders will need to know what rules other countries will put in place.

The potential is indeed huge for drones to deliver small, life-saving packages, such as vaccines. The potential for confusion between military action and humanitarian work is high.

Despite US moves, current UK legislation dictates that drones cannot be flown within 50m of a building or a person or within 150 metres of a built-up area. The maximum flight height is also only 400 feet, while the drone has to remain in line of sight and within 500 metres of the pilot, which has restricted attempts to use drones for delivery or surveillance purposes.

Pilots must complete a training course and apply for a permit from the Civil Aviation Authority to fly the drone for commercial purposes.

Meanwhile the world’s first passenger drone has been cleared for testing in Nevada, which could revolutionise transport both in urban environments and in disaster situations.