Overweight Truck Drivers and the Dangers of Undiagnosed Sleep Apnoeas 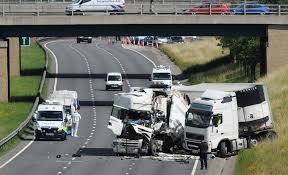 Truck drivers tend to be overweight, even obese, more so than for most other occupations. This can lead to obstructive sleep apnoeas (OSA – see ‘Very Heavy Snoring…’), common in overweight, middle aged men, and is due to a temporary collapse of the back of the throat, preventing air entering the lungs, but overcome by a brief awakening, causing the airway to open up with very loud snoring.  Such sleep disruptions, which can be numerous, cause excessive daytime sleepiness.  Sufferers are usually unaware of this sleep disorder and feel that their sleepiness during the day is normal, especially truck drivers, who are likely to attribute it to their irregular work and sleep hours.

OSA increases the risk of a sleep related collision by around seven times.  There are at least half a million licensed truck drivers in the UK, and since around a quarter of them are obese, it likely that many have significant OSA.  Given that OSA is most common in middle aged men, and that truck driving is a profession attracting few young adults, this population of drivers is ageing steadily.

Although mile for mile, truck drivers are among the safest road users, their annual mileage can be around five times that of an average car driver.  Apart from irregular hours, those driving articulated lorries frequently have to sleep overnight in the truck’s small bunk bed at a noisy truck stop.  As they can drive legally for up to four and half hours without a break, often having to do so because of delivery deadlines, it is hardly surprising that if they also have OSA, they are likely to fall asleep at the wheel.

Falling asleep at the wheel is the most common single cause of a truck driver being killed at work or for a truck killing other road users, as well as for the truck and its load being written off.  A 40 tonne truck travelling at its maximum speed of 56mph, failing to brake because the driver is asleep, will crush at least the first car and its occupants if it hits a queue of stationary vehicles.  If it collides with the central barrier, this usually collapses and the truck careers into the opposite carriageway with the risk of colliding with oncoming vehicles.

Drivers of articulated trucks, as well as younger drivers of smaller rigid sided trucks require a driving licence that necessitates their passing an initial medical examination and further superficial medical examinations at the age of 45 and 5 yearly afterwards, until the age of 65.  Much can happen to their weight and the development of OSA in the intervals between these examinations, which only require brief questions from the doctor, and no specific physical examination related to OSA. Many truck drivers therefore continue to drive with their OSA remaining unrecognised.  Moreover, drivers of rigid sided trucks weighing less than 7.5 tonnes are permitted to drive on their normal car license if this was issued before 1997, and they will not require any medical examination until they reach 70 years.

OSA is readily treatable with a combination of life style advice, particularly weight loss, and the use of a continuous positive airway pressure (CPAP) system to assist breathing at night.  CPAP is usually very effective and enables these drivers to return to driving with DVLA approval within around 3 weeks from the start of effective treatment.  Diagnosis is straightforward and can be streamlined, firstly by the driver completing a self assessment questionnaire, maybe followed by a simple home sleep study measuring oxygen levels during sleep.  Those with suspected OSA could be referred to the nearest appropriate sleep clinic for assessment and provision of CPAP if required.  All this is relatively inexpensive, costing about the same as 3 or 4 truck tyres, or a tankful of diesel, which contrasts with £1.5 million estimated by the Department for Transport as the cost of a fatal truck collision (excluding the associated human misery).

The British Sleep Society is campaigning for potential life-saving cost-effective screening and treatment of OSA among truck drivers, to enable them to remain alert and drive safely.  Early diagnosis and treatment not only reduces the risk of road traffic accidents, but also the risk of cardiovascular disease, especially hypertension, myocardial infarction and stroke, all of which are more common in those with OSA.

The British Sleep Society is currently approaching employers, unions, road safety and governmental organisations as well as truckers and their families for support for such a scheme, which will benefit all concerned and reduce road deaths.