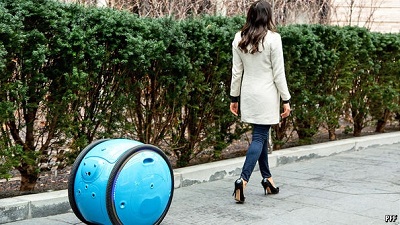 WHO would be a delivery driver? As if a brutal schedule, grumpy motorists, lurking traffic wardens and the risk of an aching back were not bad enough, they now face the fear of robots taking their jobs. Though the buzzing, parcel-carrying aerial drones planned by the likes of Amazon and Google get most of the press, a more serious threat may come from a new breed of ’droids that are about to take to the world’s pavements.

The latest, called Gita, was unveiled earlier this month by Piaggio Fast Forward, a subsidiary of Piaggio, an Italian firm that is best known for making Vespa motor scooters. Gita’s luggage compartment is a squat, drumlike cylinder that has been turned on its side. This, as the picture above shows, is fitted with two wheels of slightly larger diameter than the drum. These let the whole thing roll smoothly along, keeping the luggage compartment upright, at up to 35kph (22mph). Normally, though, Gita does not travel anything like that fast. Instead, it follows at walking pace a metre or two behind its human owner—or, more accurately, an electronic belt that the owner wears. A wireless connection to a stereoscopic camera on this belt lets it map its surroundings, better enabling it to trail its owner around street corners or through doors.

Gita can carry up to 18kg of cargo for about eight hours between charges. That makes it ideal for ferrying the shopping of those who still prefer to visit stores in person, rather than ordering goods online. Eventually, though, it will serve the online market too, using its own cameras, maps and ultrasonic sensors to carry out deliveries by itself.

Piaggio is now putting a dozen or so Gitas to work in pilot projects around America, doing things like carrying tools for workers, guiding people through airports and assisting with deliveries. And it is not alone. Starship Technologies, an Estonian company started by Ahti Heinla and Janus Friis, two of the founders of Skype, has similar ambitions. Starship’s as-yet unnamed suitcase-sized robot has six small wheels, travels at 6kph and holds 10kg of cargo. Rather than doggedly following a human being, it navigates itself around using cameras and ultrasonic sensors—though a remote operator can take control of it to supervise tricky manoeuvres such as crossing roads.

Starship already has dozens of these robots trundling around delivering packages, groceries and takeaway food to customers in several European cities, and also in Washington, DC, and parts of Silicon Valley. When the kinks have been ironed out, it hopes to offer such deliveries commercially for about $1 a pop. The firm says that its robots have covered tens of thousands of kilometres and met millions of people so far, with no accidents. And although each robot currently requires its own human overseer, the plan is that, ultimately, a single person will be able to herd a flock of up to 100 of them online.

One problem faced by the designers of ’bots such as these is that unlike roads, which have well-established rules, lane markings and traffic signals to guide autonomous vehicles using them, the pavements running alongside those roads are what roboticists refer to as “unstructured environments”. People can walk, jog or roller-skate wherever they please on them, and there is an ever-shifting array of dogs, prams, signs and rubbish to avoid, as well.

The key to robotic navigation is to understand the way people use the space the robot is in, says Matt Delaney, an engineer who has worked on autonomous cars and lunar rovers, and is now starting his own robotic-delivery firm, Marble, in San Francisco. “The pedestrian environment is very cultural,” he says. “If you monitor people over many long repetitions in testing, a robot can learn the best routes.”

Marble will not yet say exactly how its robots adapt themselves from the fast-paced streets of Manhattan to the laid-back hills of San Francisco—possibly because the Bay Area’s pavements are filling rapidly with aspiring rivals. Dispatch, also in San Francisco, is testing tricycle “Carry” robots, which look a bit like beer-cooling picnic boxes on wheels, on two Californian university campuses. And, down the road in Palo Alto, another newly started firm, Robby, is also working on a delivery ’bot.

Irritating though they may eventually become to some, however, lightweight, slow-moving robots like Piaggio’s and Starship’s do not generate the safety concerns that accompany autonomous cars (which are heavy and fast-moving) and flying drones (which can fall out of the sky onto your head, and also cause a significant noise nuisance). As a result, they do not attract the same level of official regulation. Starship has successfully sponsored legislation in some American jurisdictions explicitly permitting autonomous delivery of the sort it is proposing to carry out. It has found, though, that most cities welcome the robots with open arms. They have the potential to reduce pollution and congestion by taking vans off the roads, to increase convenience and to reduce costs. And they have one other advantage. When they do bring something to your doorstep, they do not expect a tip.