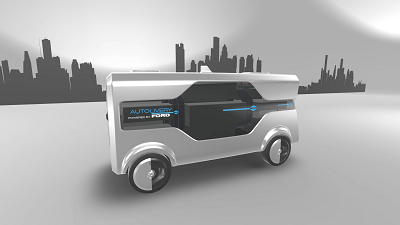 Ford has unveiled “Autolivery” – a self-driving van concept that would work in tandem with drones to pick up and collect goods and packages in urban areas.

The concept, which was developed by a group of Ford employees, was shown at Mobile World Congress in Barcelona, as part of Ford’s vision of the “City of Tomorrow”.

The concept could be experienced through virtual reality headsets.The experience showed dinner party preparations, with a missing ingredient quickly ordered and delivered in time to add to the recipe.

Ford reckons that self-driving vans could quickly and efficiently transport everything from groceries to urgently needed medical supplies on the ground, with drones potentially able to take to the air for the final leg of the journey to reach destinations inaccessible by car, such as high up in a tower block – or where parking would be difficult, impractical, or unsafe.

Ken Washington, vice president, research and advanced engineering, said: “While the scene shown today is not yet possible, ‘Autolivery’ suggests how our on-going mobility research could enrich our lives in a more sustainable ‘City of Tomorrow’.”

“Autolivery” was developed by Shanghai-based Ford designers Euishik Bang, James Kuo and Chelsia Lau who responded to Ford’s Last Mile Mobility Challenge – to come up with mobility solutions for urban areas. It paid particular attention to the challenge of the “last 15 metres” in goods delivery – widely considered the most challenging part of the goods delivery process to automate. Ford expects pressure to solve this challenge is to increase globally in coming years with GDP growth and a rise in local deliveries due to online sales.

“It’s all about making life in the city easier. The possibility of harnessing autonomous and electric vehicle technology with drones to quickly and easily send and deliver parcels could help to make life better for everyone,” said Bang.

Ford intends to have a fully autonomous vehicle for commercial application in mobility services such as ride sharing, ride hailing or package delivery fleets in 2021. It also expects continued growth in electrified vehicles offerings, to the point where they outnumber their petrol-powered counterparts in the next 15 years.