How Long Does It Take To Locate A Lost Christmas Present? 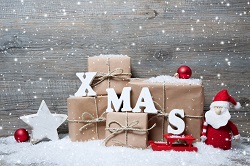 Online shoppers will usually have to spend an average of two-and-a-half hours sorting out any issues they have with damaged or missing Christmas parcels.

Last Christmas, consumers who were not compensated were out of pocket by an average of £30 a parcel due to damaged or lost goods, hours wasted and time away from work.

Including deliveries carried out by Royal Mail, up to 390 million parcels will be dealt with in the run-up to Christmas.

Problems meant customers were left £148m out of pocket overall.

The most common problem reported by members of the public was difficulty getting through to the delivery company, along with confusion about responsibility, compensation and unexpected handling fees on parcels from outside the EU.

Off to the depot

In an extreme situation, we know of one consumer who spent £200 on the phone to a delivery company.

It's not just the money though, it's the time spent resolving the issue.

Rather than phoning the delivery company, the best thing do is take it up with the retailer.

Tips on how to avoid delivery problems: