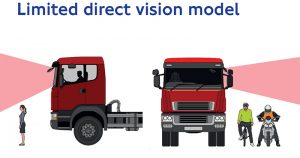 Responding to TfL’s Direct Vision Standard consultation, the BVRLA said more road safety evidence is needed to justify the proposed changes. It also called for a national policy on direct vision rather than a unique standard for the capital.

Under the direct vision proposals a rating system from zero to five stars would be imposed on HGVs entering the city, based on the level of unaided vision the driver has from the cab.

Although not yet finalised, it is understood that trucks fitted with low-entry cabs would typically score highly, perhaps the full five-stars.

From 2020 trucks with a zero-rating will be banned from the capital, and by 2024, TfL wants trucks achieving less than a three-star rating to be excluded from London.

It has been reported that this could see approximately half of all HGVs currently operating in London banned from the capital by 2024.

The direct vision proposals are in response to the level of HGVs involved in pedestrian and cyclist fatalities in the capital, which TfL said in 2014/15 stood at 22.5% and 58% respectively.

Commenting on the proposals, BVRLA chief executive Gerry Keaney said: “We welcome the mayor’s attempts to improve road safety in London, but while his intentions are noble, he’s approaching this the wrong way.

“Installing a window in the door panel [seen as a possible, partial solution] of every truck that our members operate is not feasible, and there is only a limited number of low entry cab vehicles on sale. TfL needs to provide more robust safety evidence to justify the changes – it should clearly explain how this new standard will work.

“BVRLA members are already improving road safety in the capital, as they have invested heavily in cyclist detection systems, sideguards and cameras. While rental and leasing companies are unable to endorse the proposals as they stand, we have told TfL that we want to help the mayor meet his goals.”

The association is calling for a national road safety framework. Keaney said: “Road deaths are not just an issue in the capital. Any new standard should be applicable for all cities in the UK, not just London.

“Our members hire out HGVs across the country to enable companies to conduct their business. One day a vehicle might be needed in Birmingham, and the next it could be required to travel into London.

Companies should not be forced to make separate considerations solely for work in the capital,” he said.