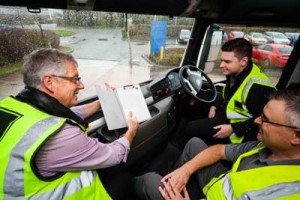 Driver behaviour is key to preventing serious collisions between HGVs and cyclists, according to transport training standards body RTITB.

The organisation is calling for more focus on driver training to prevent cyclist fatalities, rather than predominantly concentrating on HGV technology and legislation as a solution.

Pointing to recent statistics from the Royal Society for the Prevention of Accidents (ROSPA), which show more than 50 cyclists killed in incidents involving HGVs every year, RTITB said human error is the leading contributory factor, “but up until now media focus has been placed on traffic safety schemes”.

“We want to challenge the popular view that technology and legislation is the answer to all cyclist related accidents,” said Laura Nelson, MD at RTITB. “We need to remember that driver behaviour is key.”

At a presentation that took place at the Health & Safety Event 2016 on 23 March, RTITB technical services executive Richard Brewer explored how improvements to driver awareness could help to reduce the number of fatal incidents involving goods vehicles and vulnerable road users every year.

“As a society we are so reliant on technology that we tend to presume it is always the best solution to an issue.

“While technology such as cameras and sensors may help to prevent fatal accidents, it isn’t the entire answer, and could even cause drivers to be more complacent,” said Brewer.

“Your brain is more powerful than the world’s biggest computer – it will always outperform the most high-tech cameras and sensors, if it is given the proper training,” he added.