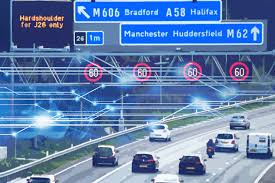 Ignore a smart motorway lane closures at your own risk. If you do, you face a £100 fine and three penalty points on your licence.

It has issued around 120,000 warning letters to drivers who have broken smart motorway rules since December 2016, with around a third relating to driving in closed lanes.

Road-side cameras which automatically detect lane violations are "currently being tested by the Home Office", the government-owned company wrote in a document seen by the Press Association.

Enforcement of red X offences have been in place since spring 2018.

Incidents are treated like passing through a red traffic light, which carries a fixed penalty of £100 and three penalty points.

Smart motorways involve using the hard shoulder for traffic unless a red X indicates it is closed, normally because of an accident or broken down vehicle.

Sections of the M1, M4, M5, M6 and M42 have already been modified, with 480 lane miles being added to England's motorway network.

Drivers should understand that where the carriageway has been blocked by a collision or a breakdown, the price for ignoring the red X could be a lot higher than a fixed penalty notice.

"Since warning letters were issued there has been a decrease in the number of drivers ignoring lane closures.

Motoring groups have raised concerns about the spacing of emergency refuge areas on smart motorways.

Highways England guidance is for the lay-bys to be no more than around 1.5 miles apart, but campaigners believe this distance should be at least halved to reduce the chances of a broken down vehicle stopping in a live running lane.