Do You Know What The Speed Limits Are for Vans In The UK? 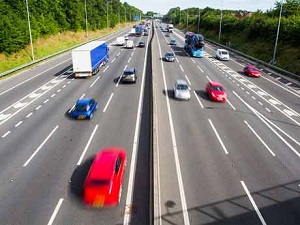 What's the speed limit for a van in the UK? Well it's not always the same as it is for cars. Here are the differences
Speed limits in the UK can be discussed until the cows come home. Are they too high? Or too low? Whatever you think, it's always useful to know exactly what the speed limits are. However, while posted limits apply to cars (which make up the majority of traffic on UK roads), not all vehicles are covered by the numbers on the speed limit signs. Here we explain the UK speed limits for vans, pick-up trucks, camper vans, car derived vans and dual

purpose vehicles. They probably aren't as straightforward as you think.

Large van, HGV and public service vehicle drivers will be instructed on the different limits for their machines when they take the advanced tests you need to pass to drive these vehicles. But if you're driving a smaller van or hiring a van for the weekend, the posted speed limits you see might not apply to the vehicle you're driving. While 30mph, 60mph and 70mph limits are the ones posted, below are the limits that most vans weighing up to 3.5 tonnes have to adhere to in the UK:

So that means the speed limit for vans drops by 10mph on single and dual carriageways, while the other two limits (for motorways and built-up areas) stay unchanged. If you're towing a trailer with your van, then the limit on motorways drops by 10mph to 60mph. Of course, these are the standard limits, local authorities have the power to post different limits on different roads and you should always keep an eye on the road signage, but these are the basic rules to stick to.

If you're driving a van with a gross vehicle weight of between 3.5t and 7.5t, the van speed limits also apply, but the vehicle should be restricted to 56mph under EU law, so the limits for dual carriageways and motorways are effectively redundant.

What are the speed limits for Car-Derived Vans?

There are exceptions to this basic rule for van speed limits, though. If the van is small and clearly a car with blank panels replacing its window glass (such as the Vauxhall Corsavan or Dacia Duster Commercial) it's classed as a Car-Derived Van (CDV) and the standard national speed limits apply. The official definition of a CDV is "a goods vehicle which is constructed or adapted as a derivative of a passenger vehicle and which has a maximum laden weight not exceeding 2.0 tonnes.

One grey area will be with vans that are also sold as MPVs and there are a lot of these on the market. Vehicles such as the Citroen Berlingo Multispace and Mercedes V-Class are MPVs and can stick to the posted limits, but then there are van versions of these vehicles in the shape of the Citroen Berlingo and the Mercedes Vito. In a way these are van-derived cars but as a driver getting into one of them for the first time, it's hard to pinpoint the classification and, therefore, the correct speed limit.

In the end, the only way to be absolutely sure is to check the vehicle's Gross Vehicle Weight (GVW). Otherwise known as its maximum laden weight, this is found on the van's weight plate, which will usually be on the door sill or door frame. If the GVW is more than two tonnes then the vehicle should adhere to the van speed limits. If the GVW is less than two tonnes then the best bet is to consult the V5C registration document. Unless the vehicle is registered as a Car-Derived Van then the van speed limits apply.

What are the speed limits for pick-up trucks?

Another grey area is the definition of a dual-purpose vehicle - one that can carry passengers as well as cargo. In UK law, a dual-purose vehicle is one that is 'constructed or adapted for the carriage both of passengers and goods and designed to weigh no more than 2,040kg when unladen'.

To qualify, vehicles must have side and rear windows, a second row of passenger seats behind the driver and either four-wheel drive or a rigid roof. They must also have at least the required ratio of passenger space to load area. Looking at these rules, it appears that pick-up trucks qualify as dual-purpose vehicles, but if you're driving one, then the standard UK speed limits for cars apply.

If the dual-purpose vehicle has seating for more than eight passengers, or measures in excess of 12 metres in length, then the lower van limits apply.

Crew vans with side windows, a row of seats behind the driver and a load area behind that will also qualify as dual-purpose in many cases, but the exact definition is complicated and there have been reports of confusion where combi or crew van speed limits are concerned.

Once again, the only way you know for certain is to check the V5C registration document. If the vehicle is classified as a car-derived van or dual-purpose commercial vehicle, then the standard speed limits apply.

What are the speed limits for large vans?

Some vans are designed to have a gross vehicle weight that exceeds 3.5 tonnes, and if they do, then they must have a speed limiter fitted by law, so the maximum limits for commercial vehicles are unattainable anyway. In many ways this will help drivers keep within the law, although there's still a need to keep an eye on your speed in built up areas.

Of course, while these are the speed limits set out by law, they aren't a target to achieve. You should always drive according to the road and weather conditions. And if you're carrying a large payload in the back of a van, then you should adjust your driving style to make sure your load doesn't move around unnecessarily, whatever speed you're going.