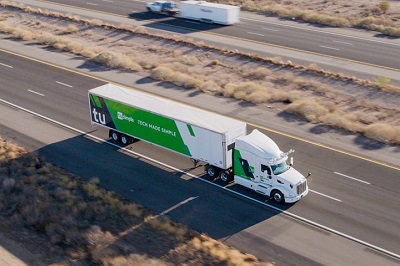 Autonomous cars are much in the news, mostly because of the collisions that are bound to happen as we mix human and robot drivers. These raise obvious questions — who pays when a robocar kills? — but the uproar over safety overlooks the fact that autonomous technology will take over commercial trucking long before the average person has to decide whether to ride in a robo-cab. Specifically, companies are building autonomous trucks today for the controlled environments of shipping ports and large industrial sites (which already have self-driving forklifts!).

Leading the charge on self-driving trucks is TuSimple, a company with dual headquarters in Beijing, China, and in San Diego, California, plus a testing facility in Tucson, Arizona. TuSimple has identified port terminal tractors as an ideal first application for autonomous vehicles. The firm even made a video of its technology in action.

Port operations are perfect for autonomous vehicles for a number of reasons, but primarily because of the closed and controlled environment in the terminal grounds. Cargo ships are loaded and unloaded and the containers are stacked in neat blocks and closely tracked. Terminal facilities are closed to the public due to safety and customs issues. Roadways are wide and the full map of a port storage yard is comparatively simple. To top it all off, speeds inside the facility are kept low, which creates a perfect scenario for autonomous vehicles.

This is a great place for autonomous trucks,” explained Chuck Price, Vice President of Product at TuSimple. “With a fully autonomous vehicle, it allows us to introduce our technology into the environment without any infrastructure change in the port. It’s a very quick introduction. They’re very excited about it, and we’re excited to be able to be a part of it.”

TuSimple has been operating a test fleet of autonomous port terminal tractors in China, and it’s gaining attention there.

“There is significant interest and it’s probably worth noting that the dominant port operator worldwide is a Chinese company,” Price told Digital Trends. “About 70-plus percent of ports are operated by the Chinese entity that we are actually working with in China doing the technology.”

TuSimple is not only unique in its choice of first applications. The company’s implementation of autonomous driving is also different from other approaches. Instead of relying on laser-based radar (LIDAR), the TuSimple technology is primarily based on cameras.

“The most visible difference between how we’re approaching the problem and how our competition approaches the problem is when we decided to build technology that is camera-centric as opposed to LIDAR-centric,” Price explained. “We use an array of 10 cameras currently, but that number is in flux as we complete our solution. We use radar as a secondary sensor. For the most part, our array of cameras delivers a superior solution to pretty much any other sensors.”

“Radar becomes relevant when we get severely degraded vision,” Price said, “which would take a lot of degradation before we have to depend on radar. At that point, not only would cameras not be working, but neither would LIDAR. Cameras are superior to LIDAR for three reasons. The first is range. Take a LIDAR system that claims to be a 200-meter LIDAR; the probability of return goes down with distance and it also goes down with the nature of the focused target. If it’s a dark target, then it’s likely to absorb the laser energy instead of reflect it back.”

For fast-moving trucks, detection range is critical for safety.

“We believe that if you have a 200-meter LIDAR, you can probably count on about half of that as reliable return,” Price explained. “Given that a large truck going down an interstate at 65 miles an hour requires about 100 meters to execute an emergency stop, you’re talking about a primary sensor that is only reliably seeing about as far as your stopping distance. That means that, basically, you’re always on the verge of a crisis. Currently, we can see 300 meters reliably and that’s not just object detection but object identification.”

TuSimple maintains that there are other benefits to using cameras. Specifically, cameras are much less expensive and much more rugged than LIDAR units.

“Currently, LIDAR is incredibly expensive and you will have to put two to four LIDAR units on a truck in order to get the coverage you need,” Price pointed out. “You’d typically have one on the cab doing a general scan out to the front, and you’ll have others on the bumper scanning the lower level because LIDAR’s vertical aperture is quite narrow. You need multiple LIDARs to cover the vertical space. Consider that the latest LIDAR units cost about $20,000 and the good ones are in the $80,000-to-$100,000 rangeThe third problem with LIDAR is reliability. The high-quality LIDARs that exist in production today have a laser mounted on a spindle that’s spinning on a bearing surface and if you shake and shock such a device on a truck, you can wear it out very quickly. You end up not only having to spend tens of thousands of dollars for a LIDAR unit, you have to do it every 2,000 miles. The combination of those three factors makes LIDAR non-effective for trucks,” Priced summed upTuSimple on the roaThe market for autonomous trucks in closed private facilities is large, but nowhere near as large as the market for self-driving trucks on the world’s highways. Like most autonomous developers, TuSimple has been testing its technology in Arizona, which has welcomed the process.“We’re quite thrilled with the support that we’re getting from Arizona,” Price told us. “Arizona has made clear, objective definitions of what they require to both operate in testing mode and to operate a vehicle without a driver. The requirements are not loose. They’re strict but they’re objective and clear and they follow guidelines that we’ve been discussing in committees and at the federal level for a number of yearsTuSimple is taking what it learned from port operations and applying it to the broader trucking industry.

“One of the benefits of us doing port operation is that it taught us how to do close-in maneuvering with the vehicles, which is tight maneuvering in very complex spaces,” Price said. “For over-the-highway trucking, we’re committed to full dock-to-dock level 4 automation, which means on the highway, near the highway, into the distribution center, and all the way into the dock.”

Right now, the company is developing a pair of test fleets for simultaneous commercial use in the U.S. and in China. On-road trucking in China is a huge industry, with over 9 million trucking companies in action.

“We have a phased process that we’re following,” Price states. “Our plan is to build up to 25 vehicles in the U.S. and 25 vehicles in China. This fleet will be operated by us with our test drivers behind the wheel. We will be hauling commercial freight for more than one shipper. We probably won’t be running all 25 trucks at the end of this year but we will be doing commercial freight for a fee. We’ll be charging for the service by the last quarter of this year.”

The elephant in the room

Autonomous companies are known for bold plans, but recent deadly accidents have cast a shadow on the entire industry. Against that backdrop, TuSimple has paid close attention to safety.

TuSimple also investigates every incident to learn what to do next time.“Our program is quite different from a passenger vehicle in that we use only Class A license holders who have received additional training as test drivers in our truck,” Price explained. “We pair them with an engineer so there are always two people in the truck. The engineer is quite good and has the ability to do a cross-check on the driver to make sure they’re attentive and following the rules. Having a professional driver assures that we have somebody who is equally knowledgeable about operating trucks in traffic on highways and we think that makes the whole program safer.”

“If anything happens, even minor little things in our garage, we do a full investigation,” Price said. “For example, if a driver bumps into something on our property while moving the vehicle around, that driver is temporarily suspended. They go through drug tests, and we do a full incident report. We are very, very conservative in how we operate.”

Right now, TuSimple is testing its Class 8 Peterbilt trucks in Arizona and has covered over 15,000 autonomous test miles. The company was founded with Chinese investment but it raised more moneythrough two rounds of funding in 2017, earning $23 million and $55 million, respectively.

With everything moving quickly on autonomous vehicles, the best results may be found away from the headlines, in applications that directly benefit business and minimize public challenges.