Police Use Unmarked Trucks To Catch Out Distracted Drivers 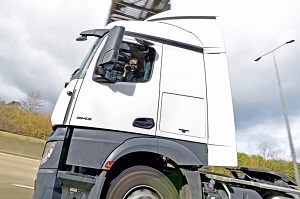 It has been just over a year since the penalty for using a handheld mobile when driving doubled to six points and a £200 fine. But official figures show one person is still killed every 10 days by drivers distracted by a phone, so it’s no surprise the authorities are still cracking down on the offence.

Operation Tramline and its ‘supercabs’ is designed to do just that, and it’s a simple but innovative idea: take one unmarked, derestricted HGV cab, put police officers in it and fit it with wide-angle cameras.

But while the supercab provides the perfect vantage point for peering down at drivers, it’s left to the fleet of unmarked police cars following behind to pull them over, acting on intelligence radioed over to them from inside the cab.

And officers aren’t just out to catch mobile phone offenders; the supercab (the brainchild of Highways England, which supplies the HGVs) targets distracted drivers in general. The scheme started in 2014 with one HGV, but proved such a hit – catching 4,000 distracted drivers over two years – that a further two supercabs recently joined the fleet, circulating among the 28 police forces that have signed up.

Motorists have been ticketed for eating cereal, applying make-up and rolling cigarettes after being spotted from the cab – but around two-thirds of offences related to mobile phones.

Legal exemptions allow the supercabus to exceed the 56mph HGV limit, so it can do 70mph, also the supercab can drive in the outside lane – unlike normal HGVs – while the spotter doesn’t have to wear a seatbelt.

The cab has one driver and one spotter – while four unmarked patrol cars and one police motorcyclist follow to pull drivers over.

And while just three supercabs – split between the North, the Midlands and the South of England – may not be enough to catch everyone, that’s not the point. The fear of prosecution is what is needed.

And is there a perfect time of day to catch drivers? Busy but free-flowing traffic - When it’s moving at 40-50mph is ideal. That way the supercab can move in and out of traffic easily. If the truck is doing 70mph, it stands out a bit.

Even though mobile phone offences dropped by 39 per cent last year, and Operation Tramline’s focus is on distracted drivers in general, phone use dominates our morning. And as the police have to deal with the consequences of distracted driving, they’ll tell you that if just one motorist is put off using a phone by the thought of being spotted by an unmarked HGV, the scheme has been a success.