Driver Jailed For Overturning Lorry While 4 Times Over Alcohol Limit 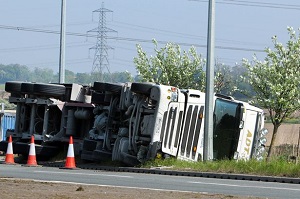 A lorry driver who overturned his fully laden HGV on the M11, while driving four times over the legal alcohol limit, was sentenced yesterday (27 November) to 16 weeks in prison.

Essex Police were called to an incident shortly before 11am on Saturday 25 November, following reports of an overturned lorry between junction 8 for Stansted Airport and junction 9 near Newmarket.

Latvian Maris Voitkevics, 45, of no fixed address, was arrested by officers from Stanway Roads Policing Unit at the scene of the crash, on suspicion of drink driving.

He was found to be almost four times over the alcohol limit and was charged by police.

Pleading guilty to drink driving at Chelmsford Magistrates’ Court on Monday 27 November, Voitkevics was handed a 16-week custodial sentence and banned from driving for 32 months. This period will begin at the end of his imprisonment.

Sergeant Colin Shead, from Stanway Roads Policing Unit, said the incident on the M11 had a “massive impact” on commuters, which saw the motorway closed for 17 hours.

“We are very lucky that Voitkevics’ actions did not have far graver consequences,” he added. “He was driving a fully laden 44-tonne lorry and the fact that nobody was injured or killed, is far more down to luck than anything else.

“My team and I are pleased that Voitkevics will serve time in prison, and I very much hope this causes him to reflect on his actions.

“Drink driving is a serious offence, and you can be sure that our officers will take swift and definite action against anyone they suspect of getting behind the wheel of a vehicle while above the legal limit."