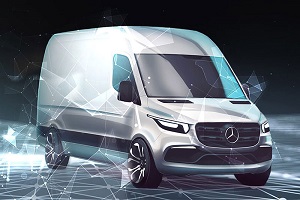 Mercedes-Benz provided a sneak peak of its plans for the 2019 Sprinter van Monday, saying it is positioning the new vehicle as a digital platform that will enhance the movement of goods and people as cities grow denser and traffic woes increase.

Automakers need to design commercial vehicles with the internet and connectivity in mind to meet the increasing demands of urban delivery, said Matthias Winkenbach of the Megacity Logistics Lab at Massachusetts Institute of Technology.

Vehicles have to be connected to shippers and fleet managers to arrange deliveries. They have to be able to adjust routes in real time to avoid traffic. They must become part of an ecosystem for so-called last-mile delivery, the distribution of goods from a central warehouse or depot to the customer.

“They will have to work more as a device to communicate with all the players,” Winkenbach told Trucks.com.

“The completely reconceptualized Sprinter will be a unique, holistic transport solution: a completely networked van as part of the Internet of Things, where we have already written connectivity into the vehicle's DNA,” Mornhinweg said.

The new Sprinter, Mercedes’ flagship van, will debut in February, but sales won't start until later in 2018. U.S. deliveries will begin closer to the end of next year. Other markets, including the U.S., will follow. This model will be the third generation since its introduction in 1995. The company has sold more than 3.3 million globally since its introduction, including a record 142,000 through the first nine months of this year.

In the U.S., the Sprinter van is a major player in the commercial work van segment. But in recent years it has gained importance in the consumer market as it developed a following among lifestyle buyerswho use the Sprinter as a mobile base for winter sports, surfing and other activities. Some even live in the vehicle full-time.

Globally, the new van will have options for front-wheel drive, rear-wheel drive and all-wheel drive. It will be offered as a regular cab or crew cab, as a bus or panel van. Mercedes will sell it with right- or left-hand-drive depending on the market. There will be four different body lengths and three roof heights.

Specifications for the U.S. market are still to be announced, but Mornhinweg did offer some details.

It will be sold with a gasoline engine in the U.S. for the first time. The current model only has diesel engines choices. Only the rear-wheel-drive and four-wheel-drive models will be offered. The low- and high-roof models will be offered in the U.S. The mid-roof van is limited to other markets. The new version will have some of autonomous safety features such as adaptive cruise control and automatic emergency braking of Mercedes passenger cars.

Mercedes designed the new van to be adaptable to a wide range of uses and requirements. Depending on the customer, existing Sprinters are driven from 4,000 to more than 200,000 miles annually.

Often they are transporting a single craftsman or delivery driver. But the vans are used as buses and shuttles. One configuration of the new version can have seating for up to 20 passengers. The company is building in connectivity for ride-sharing and pooling.

Some versions will be equipped for grocery and prepared food delivery with different climate zones in the cargo area.

There will even be a battery-electric version. Mercedes didn’t provide details except to say that it will have a 41.4 kilowatt-hour battery pack and a range that will probably equate to around 100 miles based on the electric variant of a small van sold in Europe.

Mornhinweg said it will be fully capable and will come with consulting services to help customers discern whether electric drive will work for their businesses and routes. There will be a rapid-charging system that will be capable of charging the battery in 30 to 60 minutes.

“We don't simply want to build a battery on wheels,” Mornhinweg said.

How soon it might be a U.S. offering depends on demand.

“In a place like Manhattan it makes a lot of sense,” Mornhinweg said.

Deliveries there are in a small geographic area and don’t require a lot of miles, he said.

Charleston, S.C., that will produce the next-generation Sprinter starting next year.

Currently, Sprinter vans are built in Germany. However, due to an old tariff known as the chicken tax, Mercedes removes the drivetrain and other mechanical components from the strictly cargo versions before shipping them to Ladson, S.C., for reassembly. Otherwise, the cargo vans would be slapped with the 25 percent tariff.

Making the new van “intelligent” will be the key to its success, Mornhinweg said.

“The market for courier, express and parcel services is characterized by tight delivery deadlines, flexible delivery windows and high cost pressures,” he said. “This gives rise accordingly to a growing scope of applications for intelligent vehicles, which are required to play an even greater role in helping to keep companies with corresponding transport needs competitive and successful.”

The vans, for example, will be used for both the delivery and return of goods. Functions such as analyzing a repair technician’s service calls can digitally fine-tune the loading and mix of parts inventory that will be required for the route.

There already is not enough capacity to meet parcel delivery demand in much of the U.S. and Europe, Mornhinweg said.

Much of the technology that Mercedes is packing into the new van is designed to fill that gap.

Building vehicles that can be connected to route optimization technology will be increasingly important for builders of commercial vans such as the Sprinter, Winkenbach said.

He cited a UPS study that found that a one-mile average reduction to its 55,000 daily delivery routes translates into an annual cost savings of more than $50 million.

“A minute gain in efficiency can lead to enormous economic effect,” Winkenbach said.

Logistics systems will have to become more autonomous and intelligent.

“We have to avoid sending a variety of vehicles through town half empty,” he said.