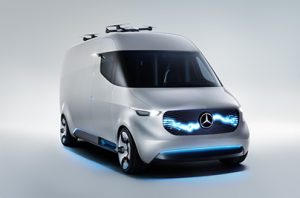 MERCEDES-BENZ Vans exhibits for the first time at this year’s CES in Las Vegas as its Vision Van gives a taste of a robotic future.

The presence at the Consumer Electronics Show underpins Mercedes-Benz Vans’ transformation into a supplier of system solutions for the transport sector – a process initiated by the van manufacturer’s strategic future initiative adVANce.

Mercedes-Benz Vans’ exhibits at CES include the van study “Vision Van”, which was debuted for the first time in September 2016.

Head of Mercedes-Benz Vans Volker Mornhinweg says: “The transportation of goods and people has always been vital to global economic development. With digitisation and the Internet of Things we are currently once again experiencing an industrial and economic revolution.

“In an era of booming online commerce, the interplay of transport and digitisation plays a vital role. Intelligent connectivity makes new services possible, enhances convenience and flexibility for the end customer and boosts efficiency in delivery operations.”

The Vision Van impressively combines the fields of transport and digitisation, integrating information and technologies on an unprecedented level.

It is the first van worldwide to serve as an integrated concept for a completely digitally connected process chain from the goods distribution depot to the consignee. It features a fully automated load compartment, integrated drones for autonomous air deliveries and a state-of-the-art joystick control.

Powered by a 75 kW electric drive system with a range of up to 270 km, deliveries with the Vision Van are emission-free and virtually silent. Combining cloud-based control software with optimised hardware, the Vision Van sets new standards in efficiency, quality and flexibility for last-mile delivery services.

The van study is an example of intelligent communication between the vehicle, the driver and their surroundings. The vehicle communicates with other road users via the Black Panel radiator grille with LED matrix and an LED display integrated in the rear end, which warns them when the vehicle is stopping, turning or releasing drones, for example.

It also indicates to road users when the vehicle is parked for a prolonged period and can thus be overtaken.

This form of intelligent communication continues inside the vehicle. The Vision Van provides its driver with all relevant information, such as speed, route planning information or drone flight details, via the dashboard, which takes the form of a broadly sweeping arc covered with a premium textile.

The Vision Van also provides information to the parcel deliverer by LED indicators in the stainless steel floor that signal by means of a special effect whether any pedestrians or cyclists are approaching.

At the rear wall of the driver’s cab, next to the package dispenser, is an info terminal that serves as a means of communication for the Vision Van’s autonomously functioning integrated systems. It also performs the role of a central control unit to connect the intelligent vehicle, the automated systems and information relating to the individual delivery orders to be carried out.

The driver is also continuously provided with information relating to manual delivery operations by means of a smartwatch. The watch shows him various data, such as the delivery address, input codes for electronic locking systems and, if necessary, secure places in which the consignment concerned can be deposited.

New possibilities also arise for end customers. They benefit from reliable new delivery options, such as same-day delivery and time-definite delivery. End customers are additionally able to adapt deliveries to their needs, rescheduling the delivery time when their plans for the day change, for example.

The van as a mothership for autonomous robots

Under the banner “Vans and Robots” Mercedes-Benz Vans presents a further pioneering project for the delivery of goods on the fringe of CES. In cooperation with Starship Technologies, an innovative delivery robot start-up, Mercedes-Benz Vans is transforming the van into a mobile goods depot and a distribution centre for automated last-mile delivery systems.

The van becomes the basis of a new type of delivery system combining a high range with low infrastructure costs.

This solution is based on a Mercedes-Benz Sprinter, incorporating a racking system which operates according to the first-in first-out principle. The rack is loaded with a total of 54 load carriers for eight Starship robots.

An algorithm calculates a route for the van with optimised stops for unloading individual robots and for collecting empty robots. The robots are loaded at predefined stops. They then proceed autonomously to the delivery destination and return to the Mercedes-Benz van – their mobile hub – at one of the subsequent stops.

The long-term vision of this concept, which also goes by the name of “Mothership”, is an autonomous robot fleet which coordinates and optimises its routes autonomously with vans from Mercedes-Benz and which is loaded automatically. Cooperation with Starship Technologies is to be stepped up in pursuit of this vision and the project is continued.

The new modus operandi adopted by Mercedes-Benz Vans also includes collaborating closely with start-ups – such as Starship Technologies. Another prominent example is the cooperation with the innovative delivery drone start-up Matternet, which is based in Menlo Park, California.

In addition to their collaboration on the Vision Van, other joint undertakings by the two companies include a pilot project testing the use of vans as landing platforms for drones in locations which are difficult to access.