Hermes Delivery Driver With So Many Parcels In His Car That It Was Impossible To See Out Of The Window. 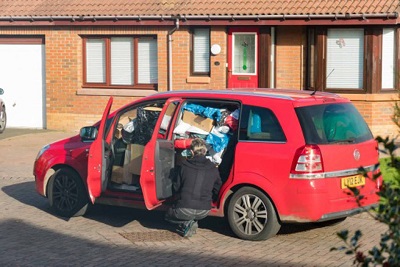 THIS astonishing picture shows a Hermes delivery driver’s car crammed with so many parcels it’s impossible to see out most of the windows.

Almost every spare inch of the red Vauxhall Zafira was wedged with items – leaving just enough space for the driver, who can be seen trying to access a package lodged in the back.

And if that wasn’t dangerous enough, the vehicle’s rear suspension appears to be compressed under the weight of the load and the tyres are almost touching the arches.

A road safety group has said the image has gone to the top of their three ‘most stupidly-loaded cars of all time’, while the delivery firm said it is investigating the incident.

A spokesman for the AA said: “This is nothing short of madness. It is a unique form of stupid driving.

“If they had to make an emergency stop, as you can imagine, everything would go flying.

“A policeman would even think twice about pulling this driver over and they would have to double take, it’s that stupid.

“The only thing perhaps more stupid than this would be the driver who tried the take a pony in his passenger seat.

“It easily comes out in our top three most stupidly loaded cars, and that list would include the driver who tried to put the horse in his car, people who put Christmas trees on their roofs, blocking their windscreens and the idiots who used to return from France or the continent so heavily laden with wine and cigarettes that their wheels would be scraping the arches.”

The AA spokesman went on to say that drivers who operate as couriers should think about buying a van.

He continued: “Our message to the driver would be get a van.

“A van has a partition between the driver and the storage compartment, making it much safer.”

A spokesman for Scotland’s Worst Drivers, who obtained the image, said: “This is downright reckless, not only has she blocked 2 of 3 mirrors, but it looks like he has overloaded the vehicle too.

“As you can see from the wheel arches there is too much weight which could affect the steering and braking.

“When turning left she won’t be able to check the near side mirror for a cyclist or look around at her blind spot. It is impossible for her to know that the zone around her vehicle is safe for her to proceed.

“Driving with an overloaded vehicle can also render your insurance policy invalid. I suggest she considers buying or hiring a van"

A spokeswoman for Hermes said: “We are concerned at what this picture appears to show as we make extra payments to couriers who return to sub depots for second trips if the volume of parcels is too much to fit into their car on the first visit.

“We will fully investigate this incident and remind the courier involved of the safety obligations we expect from our suppliers.”