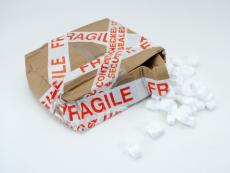 Yodel executive chairman Dick Stead has described the footage of Yodel employees throwing parcels about in an undercover TV report as a disgrace after it aired on Channel 4.

An episode of Dispatches contained footage of hub workers throwing parcels, including some marked as fragile, as well as dropping and walking over others.

Speaking at The Delivery Conference in London, Stead said: “Throwing parcels in sorting centres is disgraceful, it is unacceptable, and I take responsibility.”

He attributed the misconduct to there having been “no supervisor on the floor at the time”.

However, he said: “A lot of the things seen in the programme were exactly what happens at any parcel company. That might sound harsh, but only one in 20,000 items we handle is damaged. If we opened the cage every time to place a package in, handling costs would jump by an estimated 50p per parcel.”

The second half of the programme featured another undercover reporter working as a Yodel courier, who highlighted that she couldn’t even make minimum wage being paid the rate of 60p per parcel when delivering in a rural area.

Working as a self-employed courier for two weeks before filming, she claimed she didn’t think she could physically deliver more than about seven parcels an hour.

Stead said: “If you take a camera crew out with you, it will slow you down.”

Stead told delegates that Yodel – which is yet to make it into the black – had failed to turn a profit during its Christmas peak, breaking even after taking on too many extra people who had nothing to do in the trough leading up to Black Friday.

The firm appointed turnaround specialist Lloyd to improve the company’s public image and customer service in February 2013, and Stead said he is confident Cooper will continue this mission.

Cooper’s background is primarily in passenger transport; previous roles include CEO of Arriva and chief commercial officer at Easyjet.